Posting the recent stories of Pastor Mkaro and Bariadi, along with a picture of some of the orphans singing at the ceremony made me think of Bibi Marge and her wonderful story. This is worth repeating.  This post is from August of 2008. 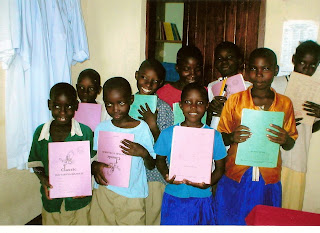 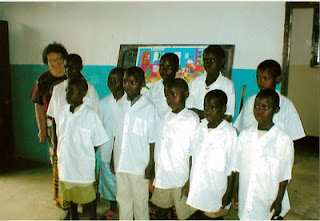 Marge Beam and some of the students

Marge Beam, 77, is a retired school teacher in central Ohio. In her early years she wanted to be a missionary, and she did spend a few years teaching at a mission school in Hawaii. After that she returned to her home in Ohio and taught in the small Jackson Center Local School.
Seven years ago Ms. Beam went on her first trip to Tanzania, led by Pastor Jan Campbell. The church at Bariadi is a sister church to Marge’s church. Their young pastor, Harold Mkaro, took special interest in this elderly visitor from America and called her “Bibi,” grandmother. Marge was touched; she had never married, had no children of her own, and suddenly she was not only a missionary, but a grandmother!
Marge has returned to Bariadi each year since 2002. She sometimes stays the maximum 90 days allowed on a tourist visa and lives in the home of Pastor Mkaro, his wife, Jen, and their three-year-old son, GodBless.
The young church Pastor Mkaro serves has great needs. Many orphaned and abandoned children come to Pastor Mkaro for help. Jen never knows how many people are coming to supper; their home is often full of children. They dreamed of opening a nursery school for the community, and with fund-raising help from Ms. Beam, that school is now a reality. But there is a growing need to care for the orphans, whose numbers increase every month. Ms. Beam and the church at Bariadi had a vision, and that visions is slowly becoming reality. The children will be housed, fed, cared for, and educated. Their parents can die in peace, knowing that their children will not wander the streets begging. And isn’t that just what our Lord Jesus Christ compels us to do?

Tanzania is located in eastern Africa on the Indian Ocean, and it covers an area roughly twice the size of California. It is home to Mt. Kilimanjaro (the highest point in Africa), Lake Victoria (the second largest lake in the world), and the Great Rift Valley. The city of Mwanza is located on the southern shore of Lake Victoria. The daily temperature in September is in the eighties and nineties with plenty of sun. The two official languages are Swahili and English. Tanzania is a peaceful nation in East Africa.

Note from Bob and Susie: Marge is an inspiration to all of us. Imagine taking your first mission trip at age 70 and returning (often flying there alone) every year and living with Pastor and family. When she said that she helped with fund raising she is being modest. As Bob says a boomer is turning 60 every 10 seconds. We will live longer, are healthier and have more disposable income than previous generations. While there is nothing wrong with retiring and spending your time playing golf…..what could be be better than what Bibi Marge is doing. We are to finish well. Imagine the difference this one retired lady makes in the lives of so many. She is a delight to be around and her enthusiasm is contagious. How lucky so many Tanzanian orphans are to have Bibi Marge. She calls her self an unclaimed blessing. She is a blessing alright and the Tanzania orphans have claimed her. To God be the Glory. Thank you for Bibi Marge.